While Daddy was away

After getting both kids in bed, one of them asleep, I started doing things around the house. Benton decided that he wasn't quite ready for sleep and talked to himself in bed until about 9:30 when he started crying. I went in to tell him to go to sleep but first decided to ask him why he was crying. His reply was, "money gone". I asked him where it went and he pointed to his mouth and said, "down there". What!? Yes Benton swallowed a penny.

While I am sure that this has happened to many people many times before, this is a first for us. Not sure of what to do I called my sister who has three kids assuming it had happened to her before and she could tell me what to do. Of course none of her kids swallowed pennies before so I called the advice nurse. They said that since he wasn't choking we just had to wait for it to pass. I assumed this was the answer but I wanted to make sure. Turns out that if they are under two it won't pass through their intestines and you have to take them in to the ER. Good thing Benton has those three extra months! Here is Benton the next morning showing where the penny went. 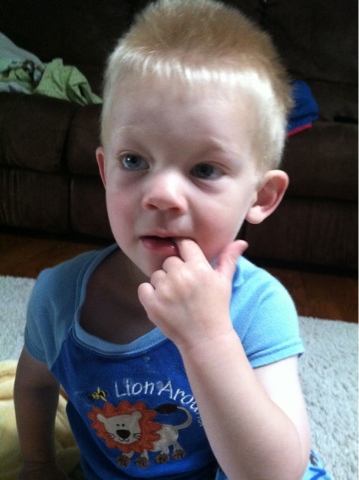 P.S. No I don't let my kids go to bed with small objects. He must have found it and snuck it somehow.
Email Post