Earlier this month Benton found a new place to have his snack. He made himself quite comfortable. 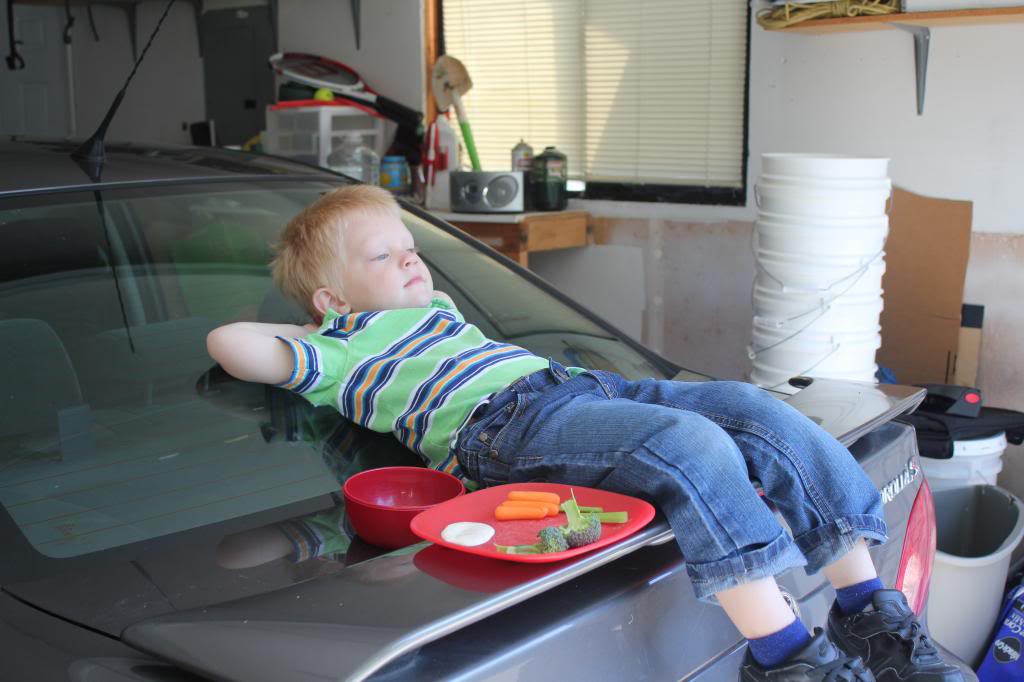 He has been up to some other silly things lately. Sometimes he can't remember the right word for something so he will just come up with something else. Sometimes it is made up, sometimes it is something he thinks is similar I guess. He watched Despicable Me for the first time, and for a few days he called it Pickalo Me.

We bought a box of Capri-Suns and when he wanted one, he asked for a submarine. That's pretty close...

We were at a friends house who had some toy binoculars. He used them for a minute and when I told him what they were he repeated me by saying binoculars as well as he could. A few minuets later when someone else was having a turn with them, he has me for a turn with the pine cones. Hummm I'm sure glad I can interpret toddler.

Benton and Emmett both love phones. Benton picks up phones and pretends to call people enough that Emmett has started. Emmett only says "Hi Dad" and then giberish as of right now but Benton's can be longer usually asking how they are. A few days ago this was his phone conversation, "Hi Dad, how are you doing? Can I have some money? Ok, thank you. Bye." I laughed and Dallin said it won't be long until he is really asking that!

Benton has recently started talking back a little bit. It is usually when I ask him to do something, he tells me to do it too. We went to Costco the other day and when we were getting into the car, I opened Benton's door and asked him to "get in a buckle yourself." He quickly responded with a little tone, "You get in and buckle yourself." Dallin quickly responded, "Benton, don't talk to your mother like that." So Benton said, "You get in and buckle yourself... please." We struggled to not let him see us laugh. Little stinker.

Lastly, Benton is pretty stubborn and when he wants something, he really wants it! For a few months he has wanted to buckle himself in his car seat. He tried and tried but couldn't get all three pieces buckled. He could always get the top buckle but the bottom two were hard. He wanted to do it, but couldn't. And he would get mad if you buckled him before he spent a long time trying. Well about three weeks ago he finally figured it out. He can buckle himself all the time now. So, two days after he figures it out he is done with it and wants me to do it. What? I was so excited to have him be able to do it himself! I guess it is only fun while trying to conquer it.
Email Post