Christmas is so exciting, the whole season is filled with fun, love, and tradition. We've been counting down the days and trying to make the most of it. Emmett learned how to say lights and Santa pretty quick and said them often. Benton loved that his favorite color, red, was used everywhere.

For Christmas Eve we joined my family at Big Al's for lunch and some fun. We did this last year and we all had so much fun that we decided to do it again. After some delicious pizza we headed upstairs to the arcades. The boys sure had fun picking out which games to play and loved winning tickets. I think we will be up for it again next year.

That night we opened some presents from family. Benton's facial expression captures the moment perfectly. 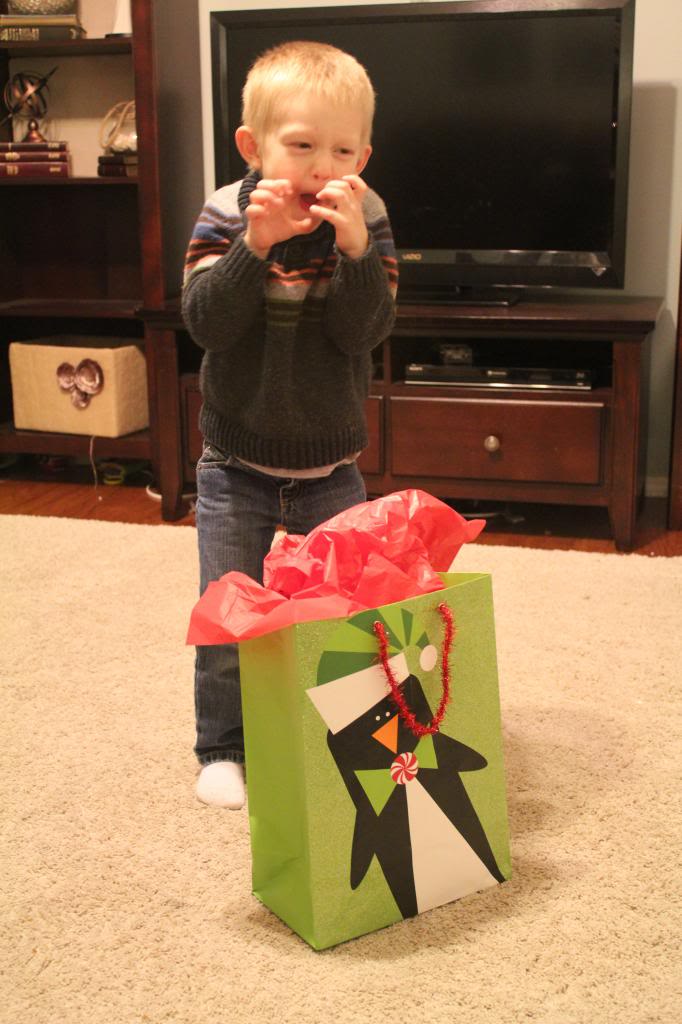 We let Benton and Emmett pick out presents for each other this year. Emmett got Benton an airplane, do you think he liked it? Emmett liked it... liked to eat it. It lasted about a day but that is all we really expected anyway. One day of lots of fun was worth it. 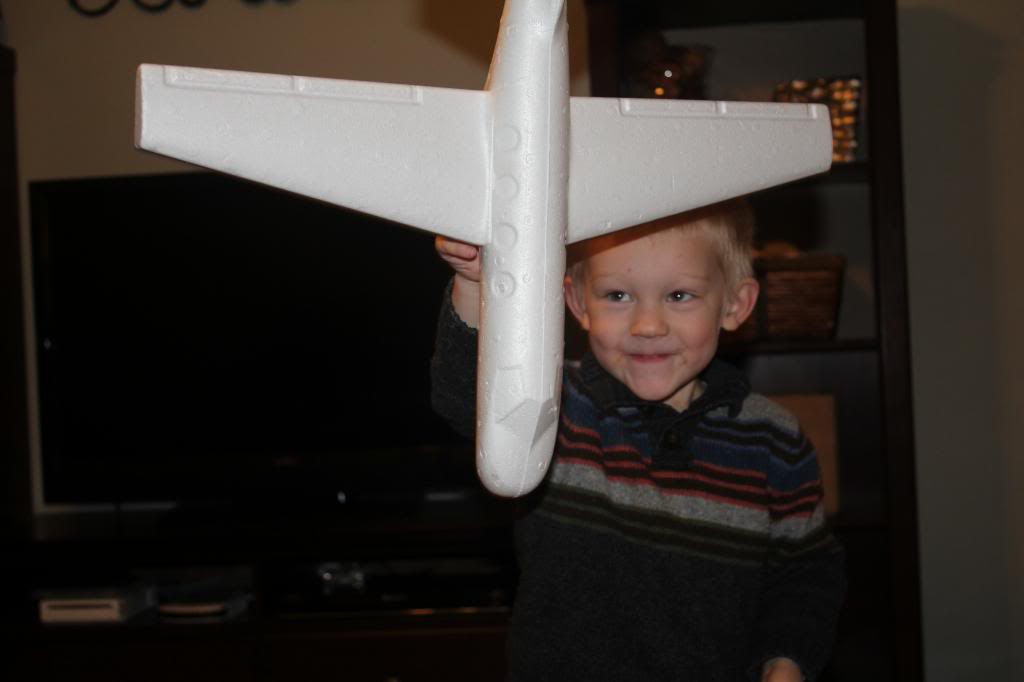 Benton picked out a lunch box for Emmett. Earlier this year Benton found a Hello Kitty lunch box that was given to me years ago and wanted to use it. So for his birthday we got him a Cars one. Then he decided that Dallin needed one so that's what he picked out for Dallin's birthday. Then one day he was playing with all of the lunchboxes, filling them up with cars and toys, and he realized that everyone had one but Emmett. That was when he decided that was what he wanted to get one for Emmett for Christmas. It was pretty thoughtful. And Emmett loved it. 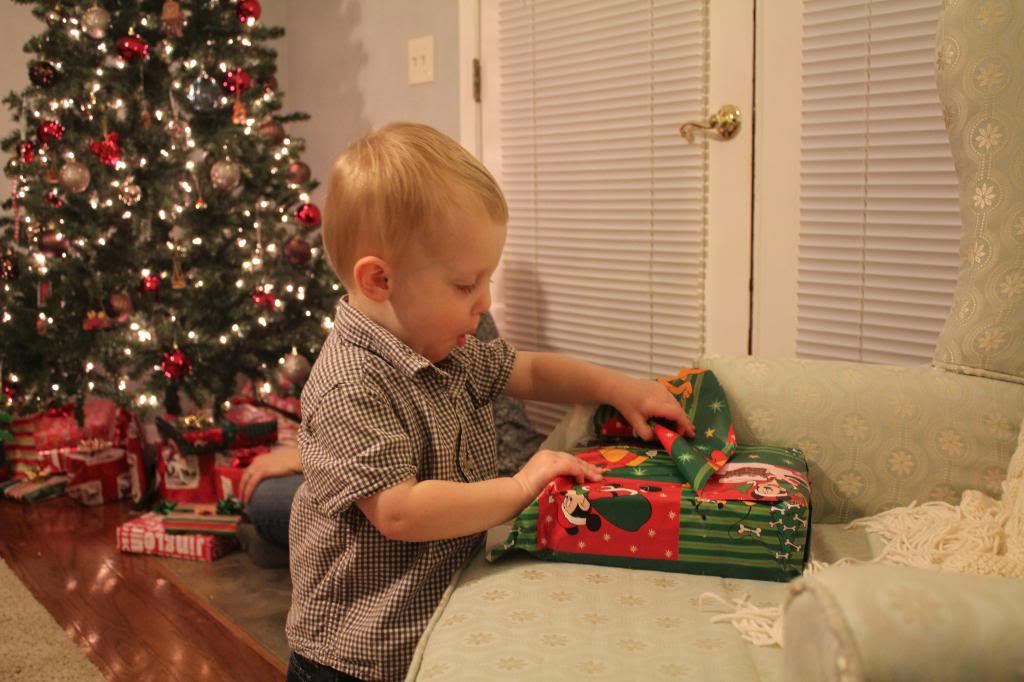 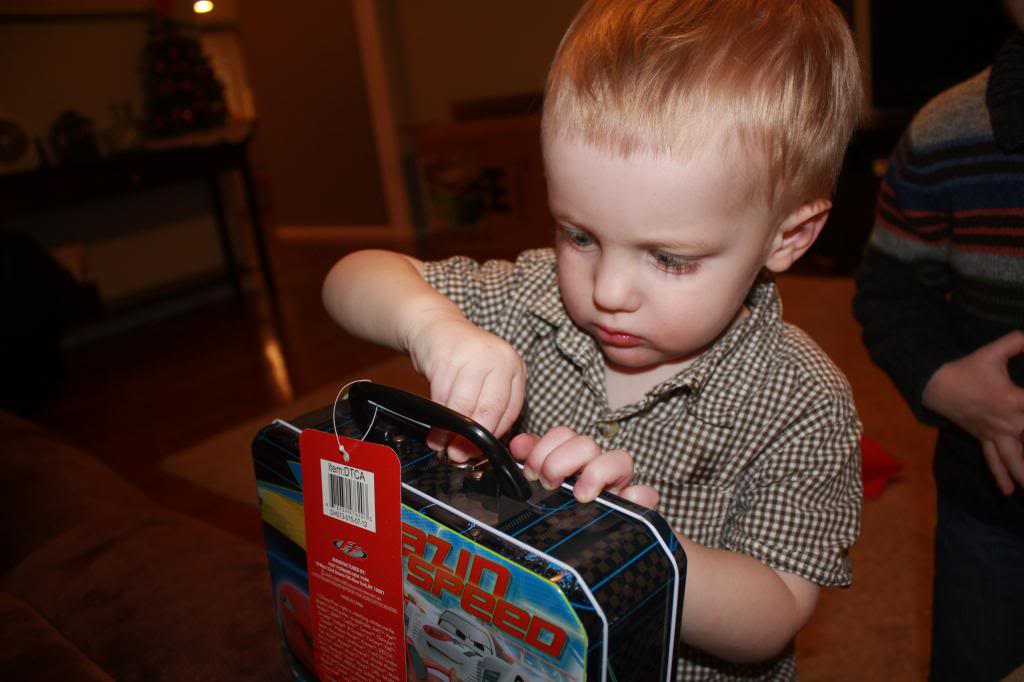 Everyone got new socks for Christmas. Who doesn't love new socks? 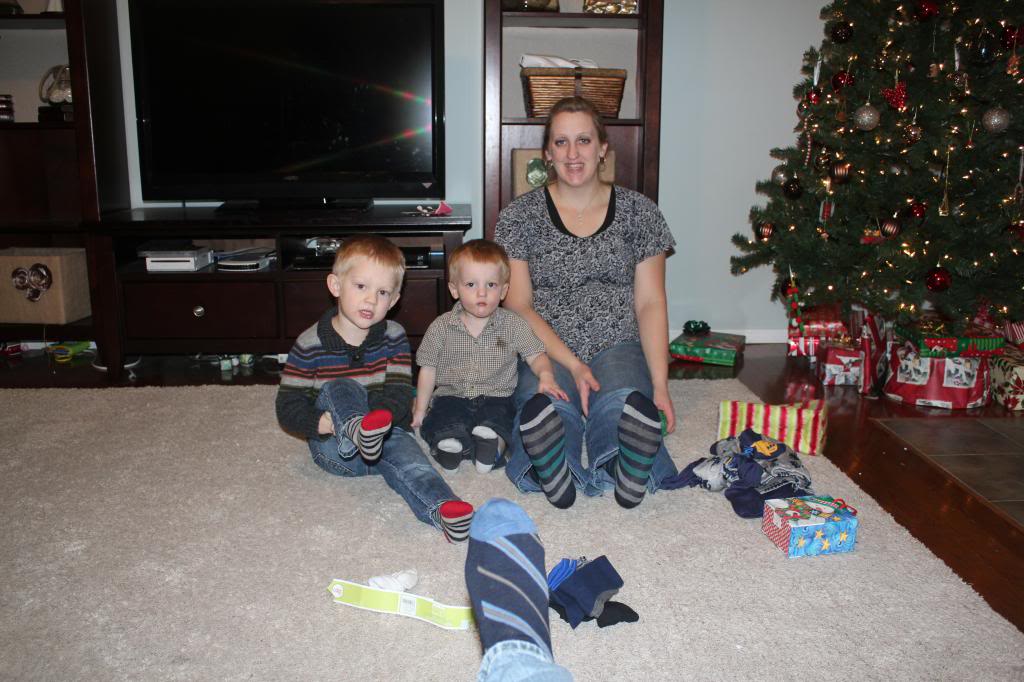 After a few more little presents from Mom and Dad the kids were off to bed. We made cookies for the first time this year and left them out for Santa. I love all the things you can do for Christmas as your children get older. They love it all! 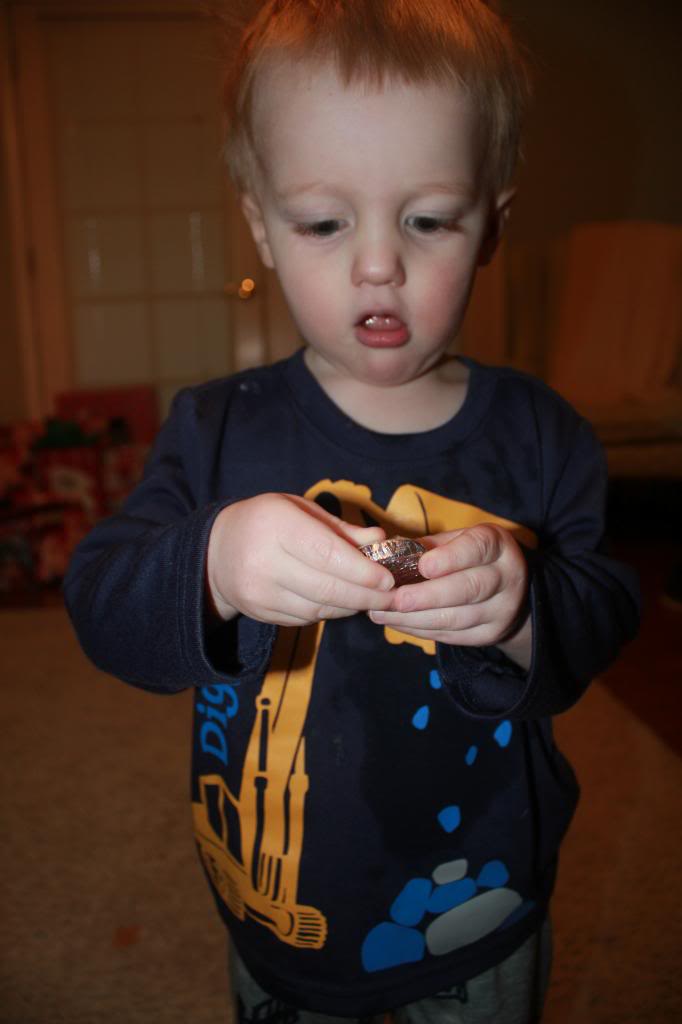 Christmas morning started bright and early... at 8:30. The kids just wouldn't wake up! Dallin and I were waiting and waiting. When they finally woke up they found the reindeer droppings (candy) outside their door. All I heard was, "Candy!" Emmett found a Santa candy and shouted "Santa!" And that was when all the fun began. The followed the trail of candy to their stockings and the Christmas tree and gathered them up into the candy bowl that we've been using in my family since I was little. 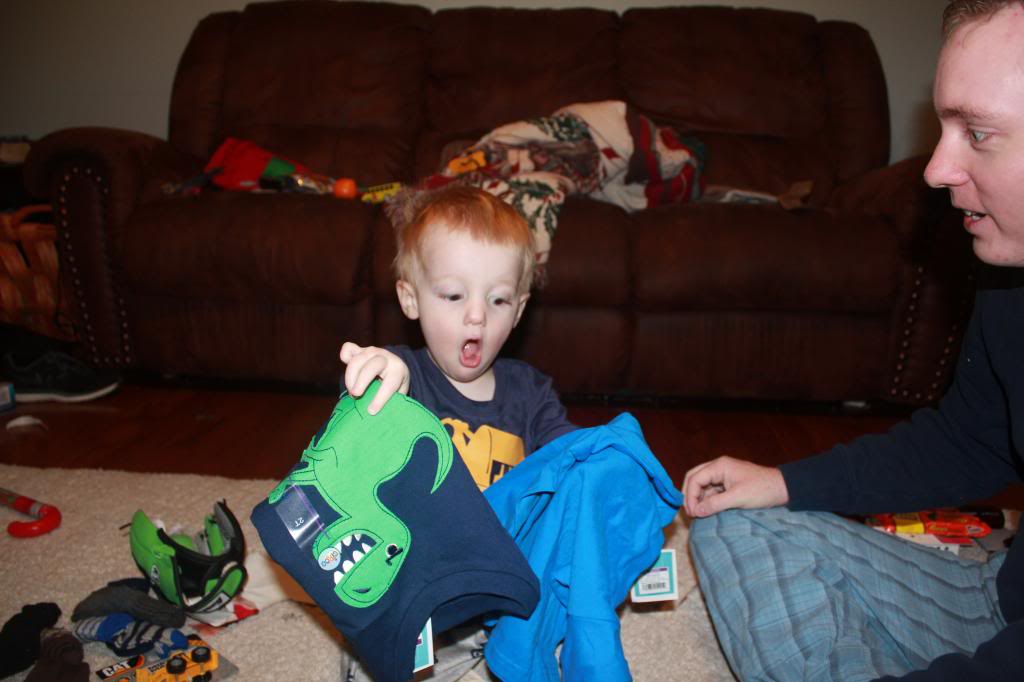 Can I just say that I love that my kids still get excited about getting clothes?! I think they were excited about every single thing they got. 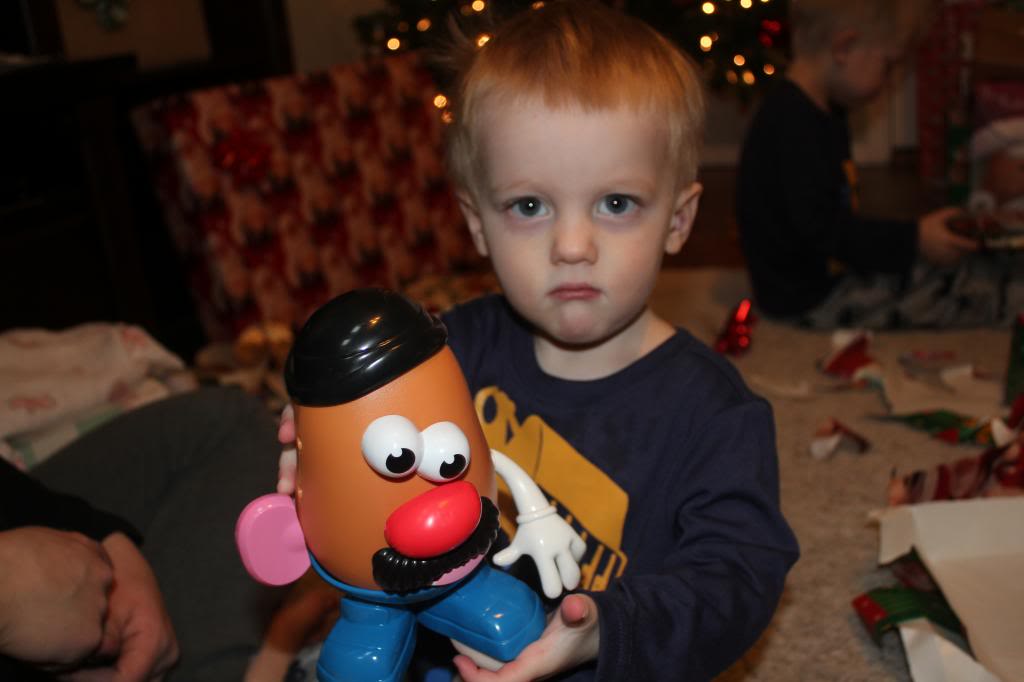 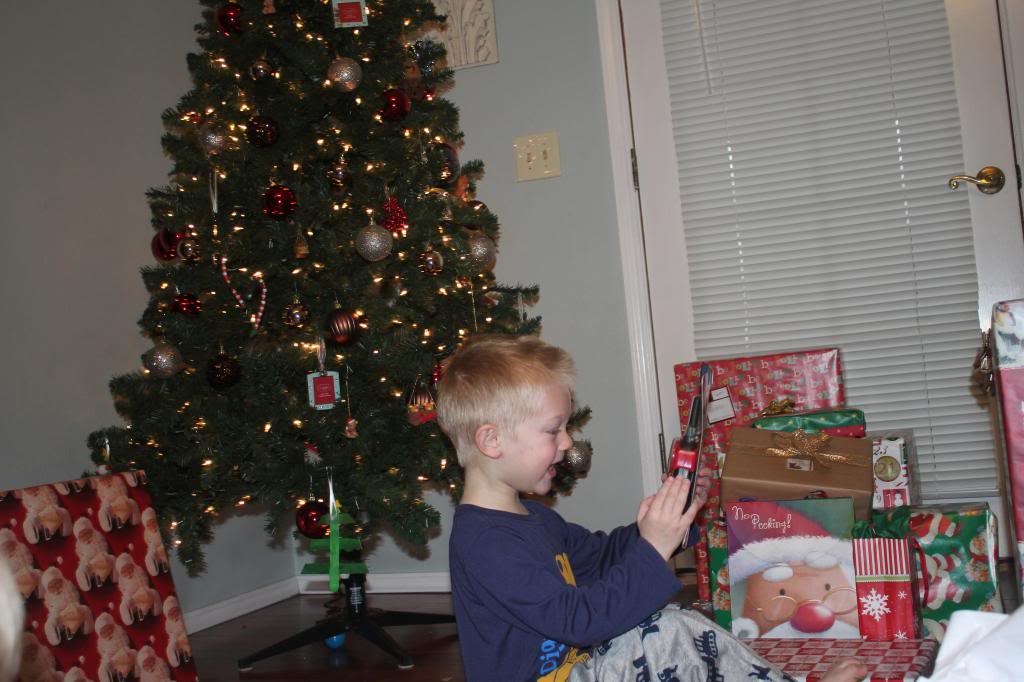 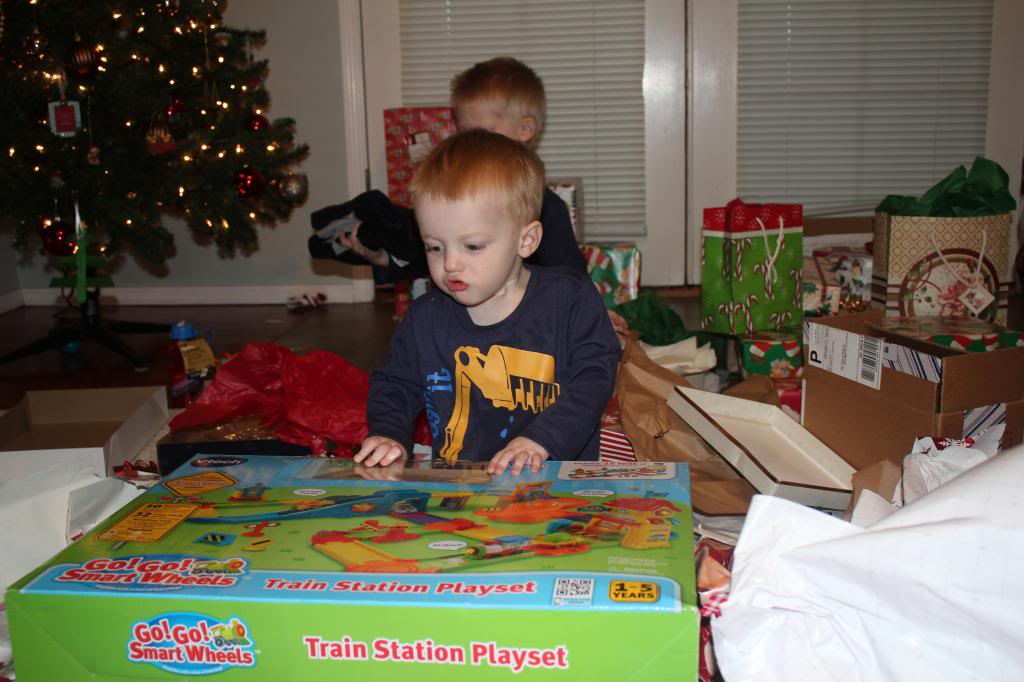 This year we added a tree to our house. We have our tree in the front room and this second tree in the living room. Its the kids tree. They get to decorate it however they want. 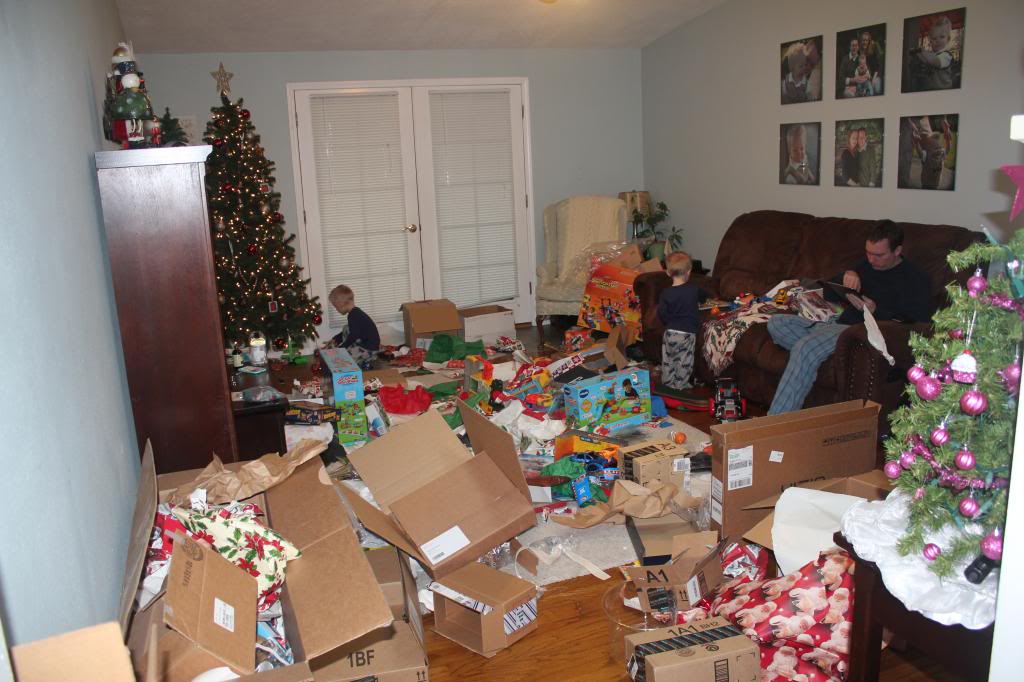 Do you think that Christmas exploded at our house? I think so. We are still recovering from all the garbage and cardboard. But we loved every minute of it. The kids love all their new toys and we play with them all the time! It will be nice when we have a new baby and I'm a little busy, hopefully they will be content to play with their gazillion toys.

In the afternoon my family all came over for dinner and we enjoyed each others company for a couple of hours. It was a pretty great Christmas.
Email Post