It was a wonderful, and interesting Christmas this year at our house. We are lucky to live close to my family and so that means every holiday we have a family dinner. This year we were the hosts for Christmas. We decided to have dinner on Christmas eve since we all had church at different times of the day on Sunday. Friday night I ran to the store to pick up the last minute things and made my list of everything to do before family showed up the next day. It was all ready.
Then Saturday morning came... and I was sick. I kept trying to convince myself that I wasn't but whenever I would start moving there was no denying. After talking to all of my family (who have ALL had this same stomach bug and so generously shared it with me) we decided to go ahead with dinner. What was I thinking?! Dallin helped me get the turkey in the oven and then I took a long nap. Dallin, being the great guy that he is, let me sleep and took Benton while he himself started getting sick. Double no fun.
Somehow we managed to set up for dinner and then as soon as my family started arriving we made them do everything. Basically we had the dinner at our house while Dallin and I watched. It was nice because my family was able to entertain Benton for the few hours they were here. Otherwise it might have been movies all day for him, poor guy. We were just grateful he didn't get sick!
I do have to say that it was nice to not worry about anything that day. The turkey wasn't even done and I didn't care. Ok, I probably should have cared about that but it did teach me to calm down a little when hosting, because everything will be fine (my sister brought a ham so there was food to eat).
After a good night sleep we all woke up ready for Christmas. We absolutely loved watching Benton that morning. First he woke up with candy outside his door, he was excited about that! 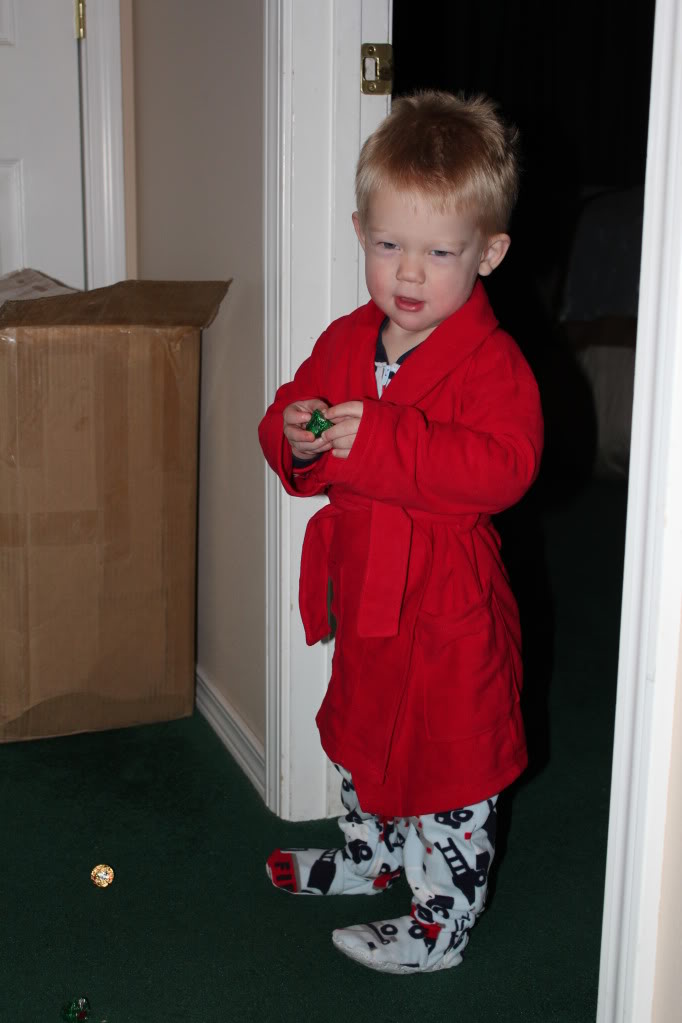 The flash was a little bright I guess. A moment later he knew there was more going on down the hallway. 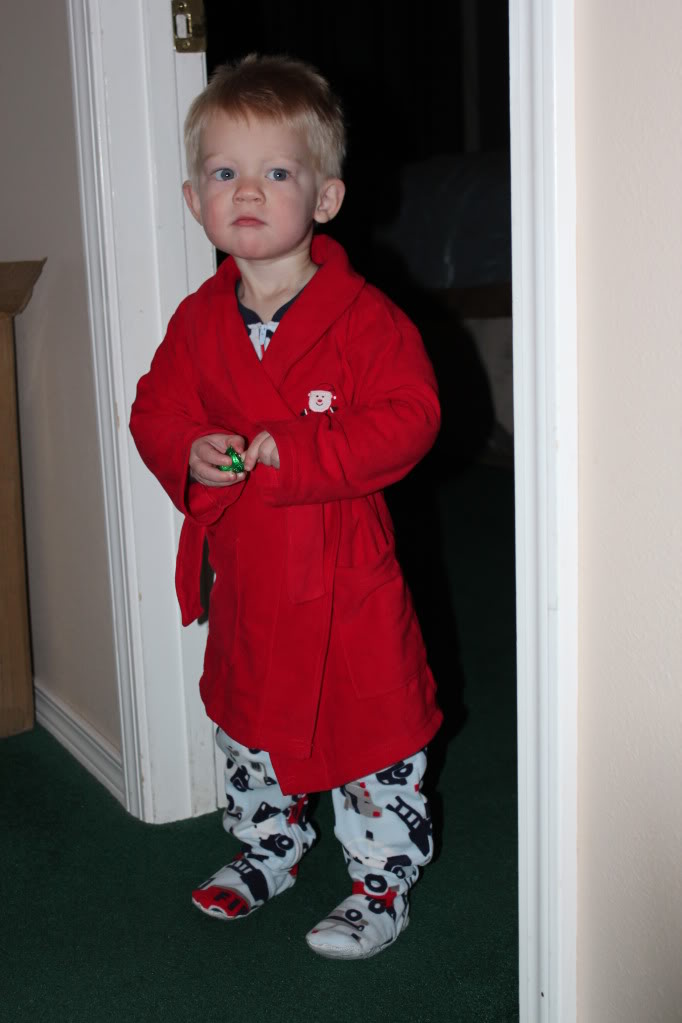 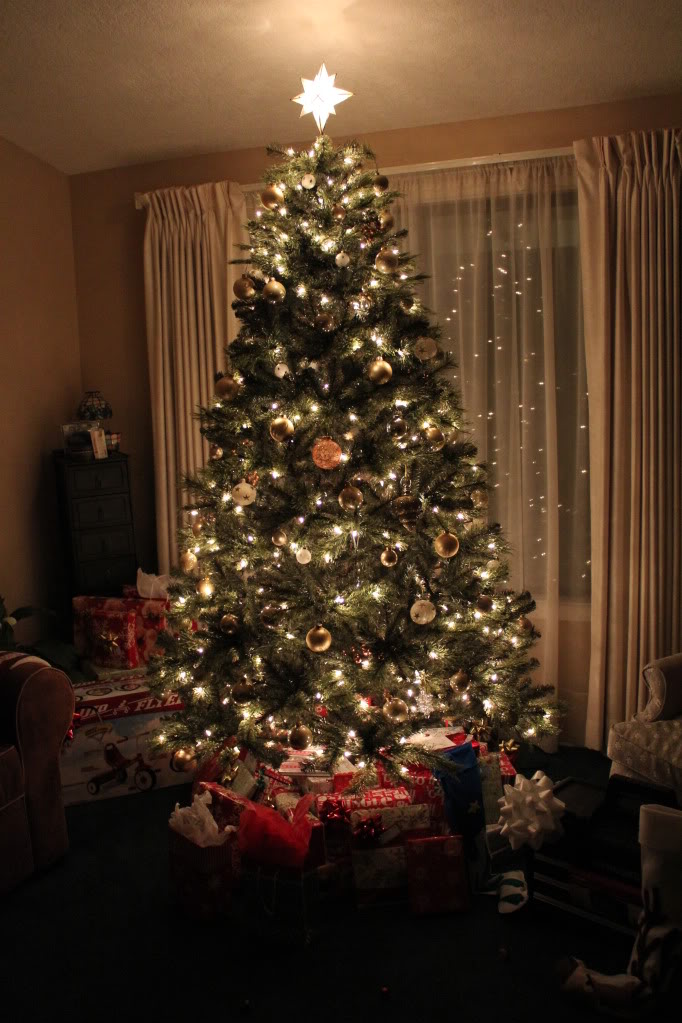 Benton got the hang of opening presents really fast and loved everything he got. The first thing he opened were these books, he was pretty excited about the handle on top the the case. 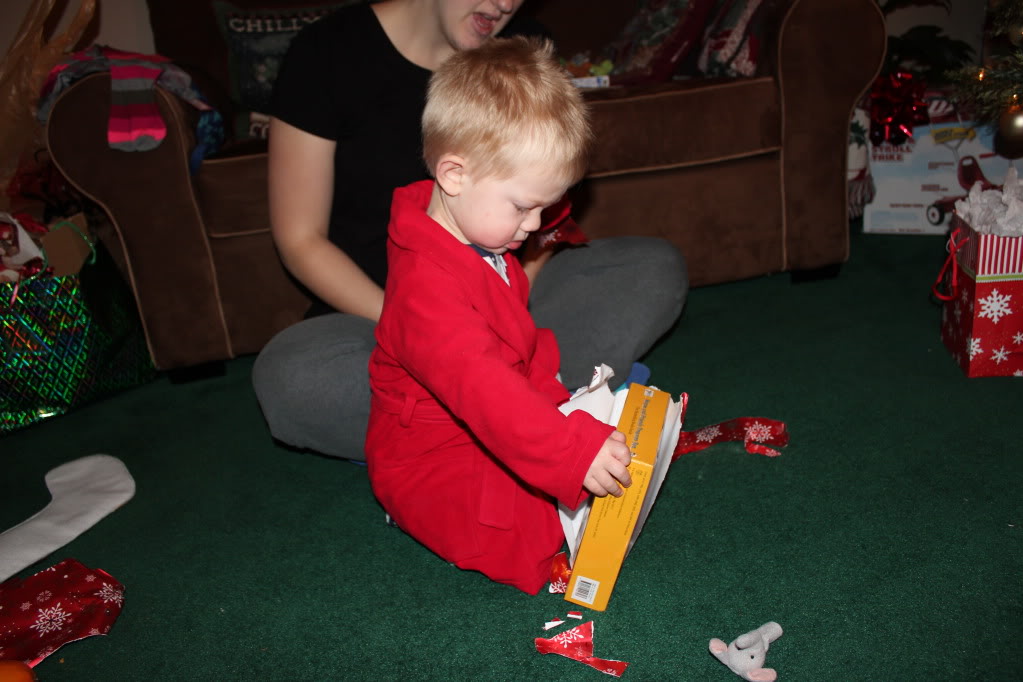 The second gift he opened was a plastic tool set. Do you think he liked it? Well let me tell you... 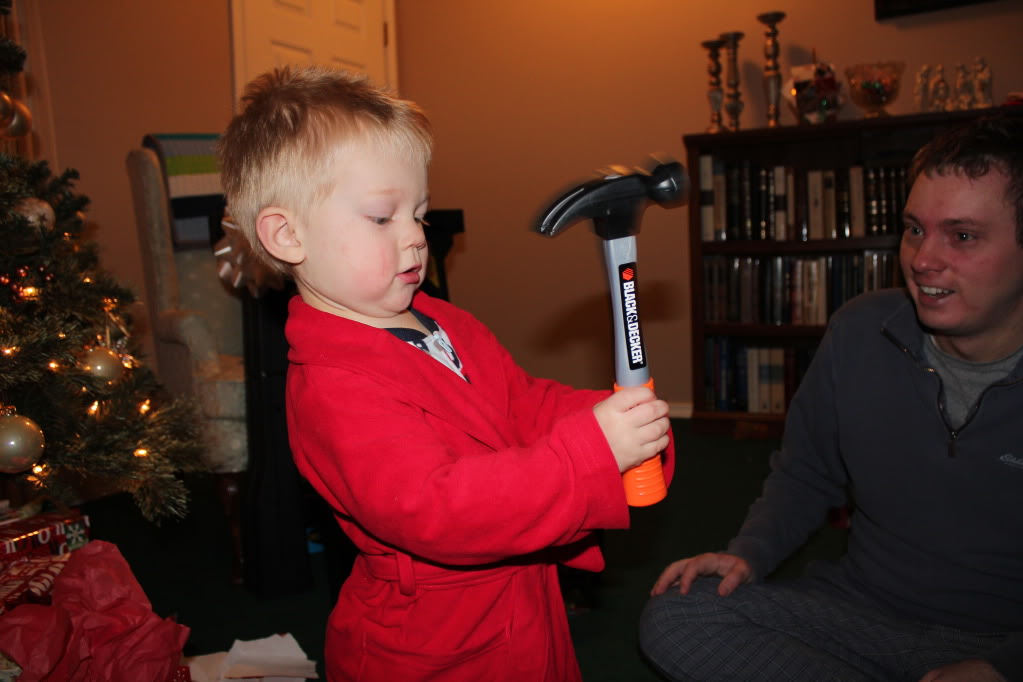 He immediately picked up the hammer and wouldn't let it go. Then he realized there were more tools! 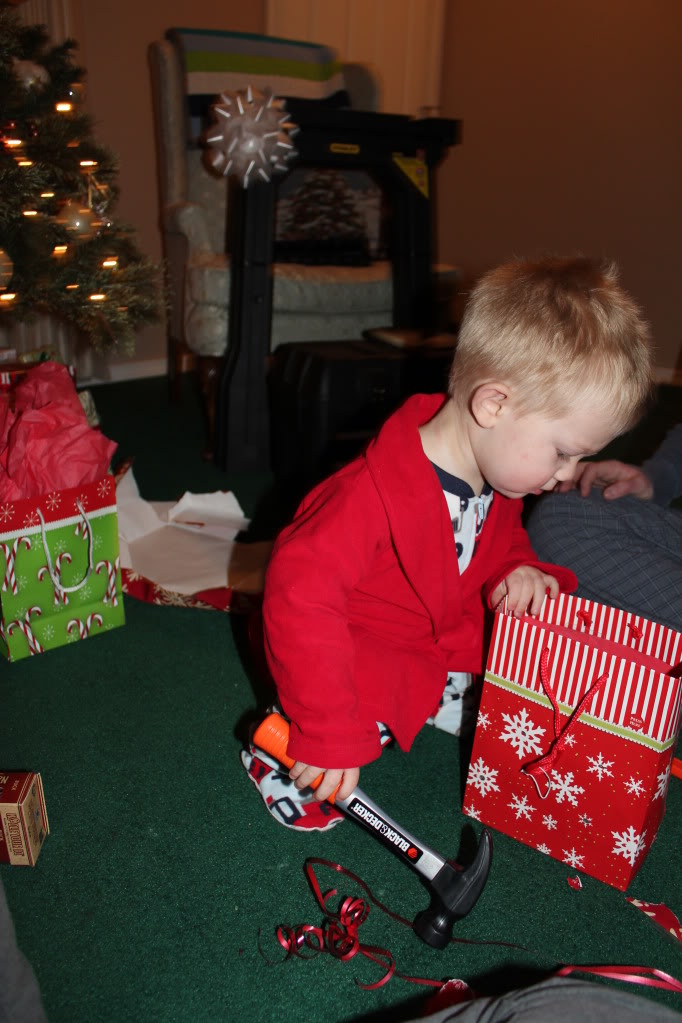 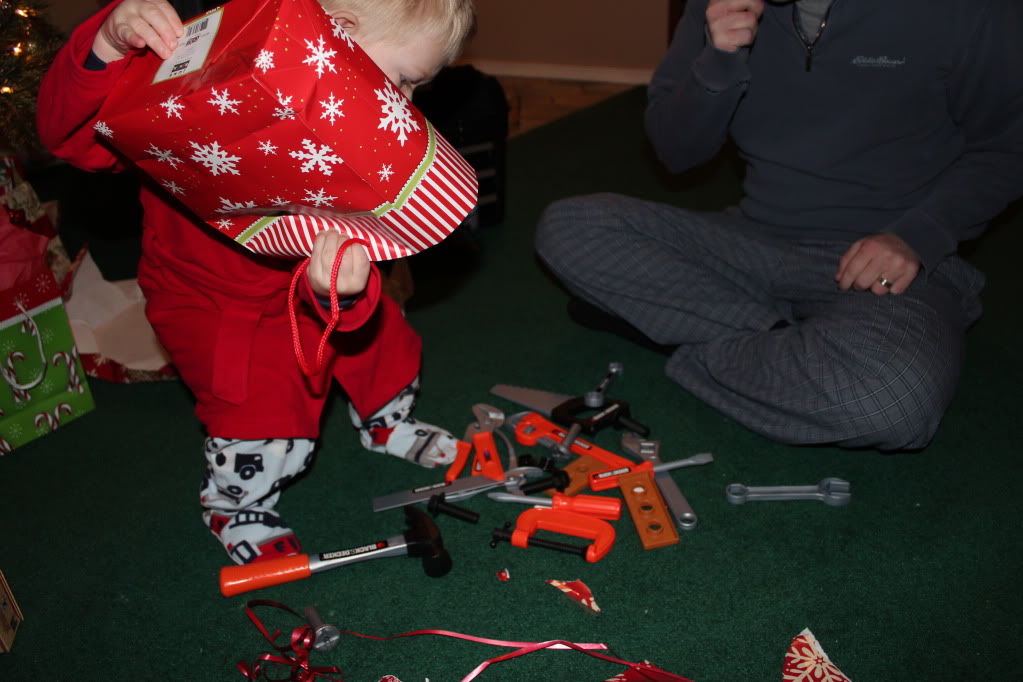 "Finally, my own tools!" 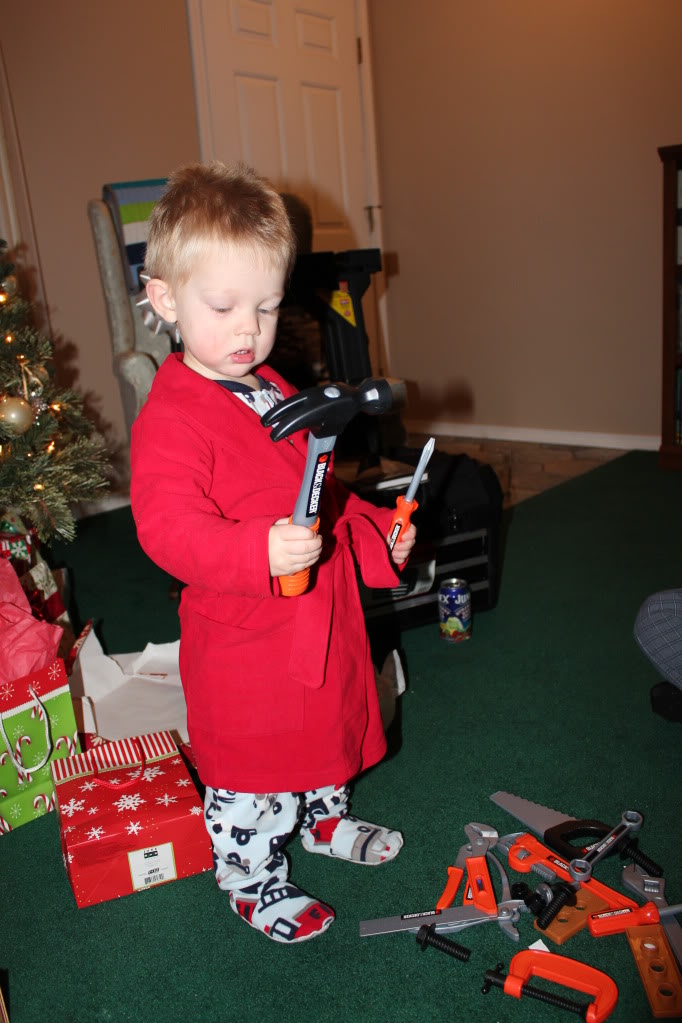 He then proceeded to open EVERY gift with his hammer. First he had to hammer it to make sure it was good, then use it to rip off the paper. There might have been some more hammering after the gift was opened too. 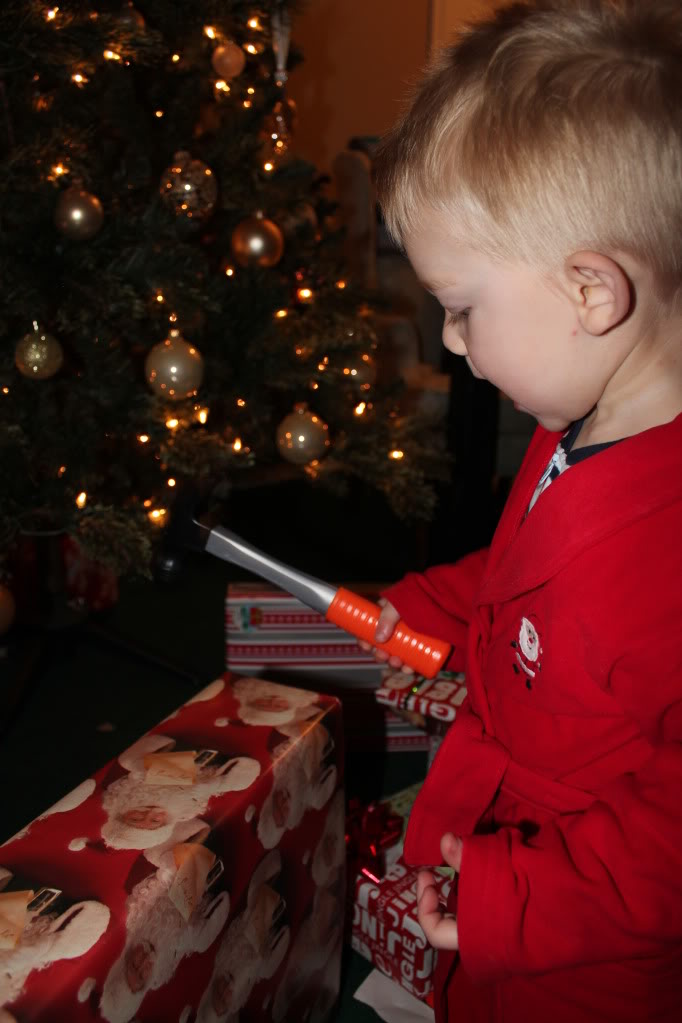 Some presents needed the saw too. 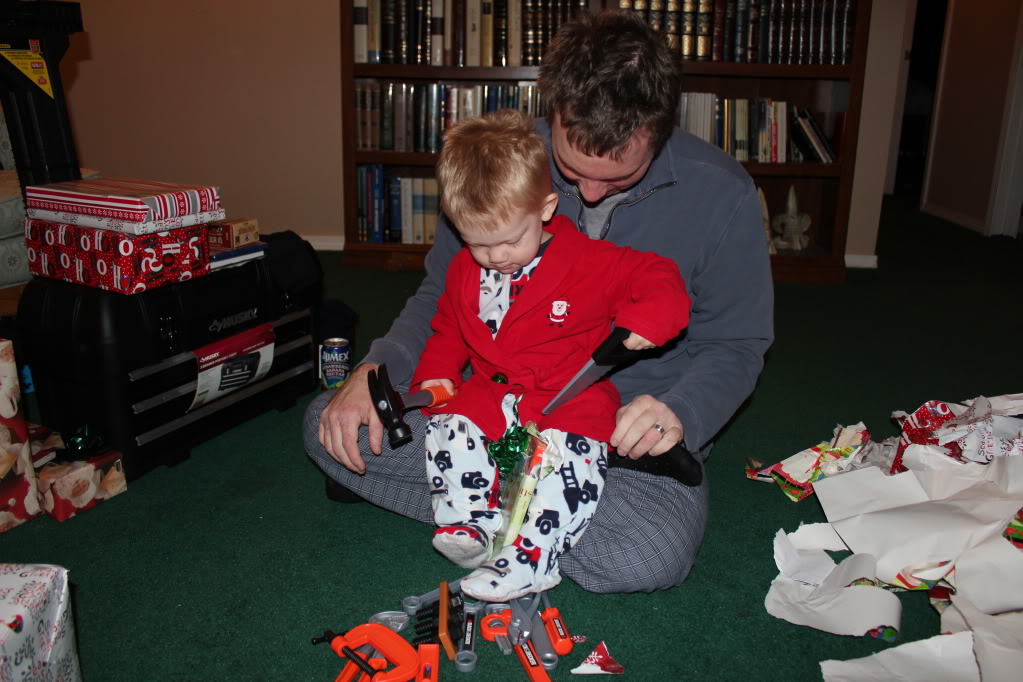 While he was happy with everything he opened there were a few gifts that actually made him put down the hammer (for about 10 seconds, but still). One of them was a mini keyboard and the other was this tricycle. 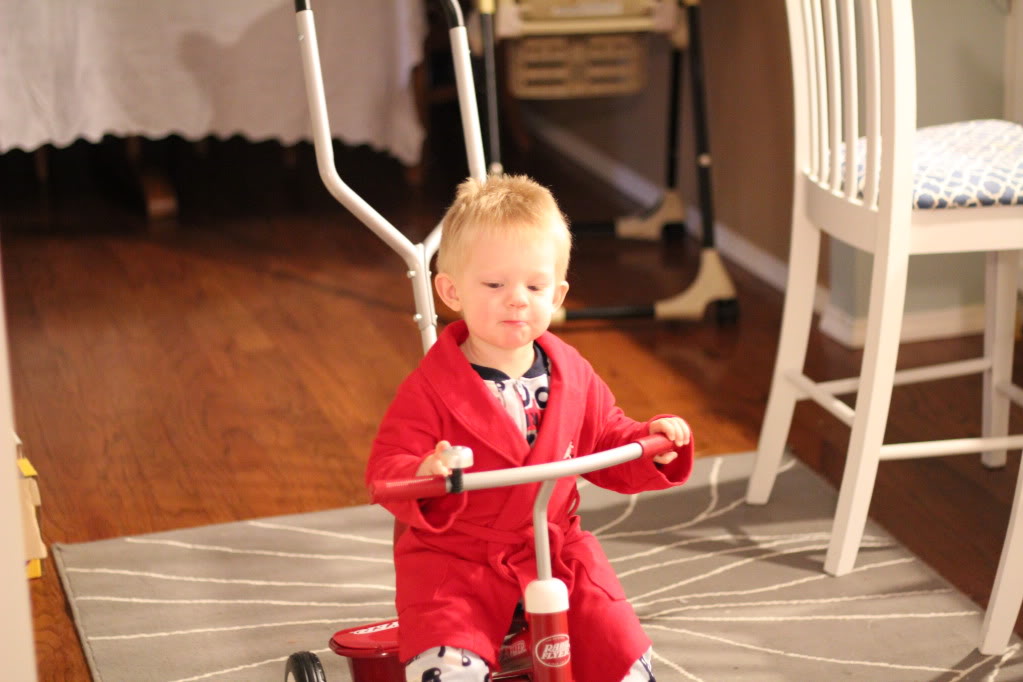 He loved ringing the bell, and being pushed around the house. 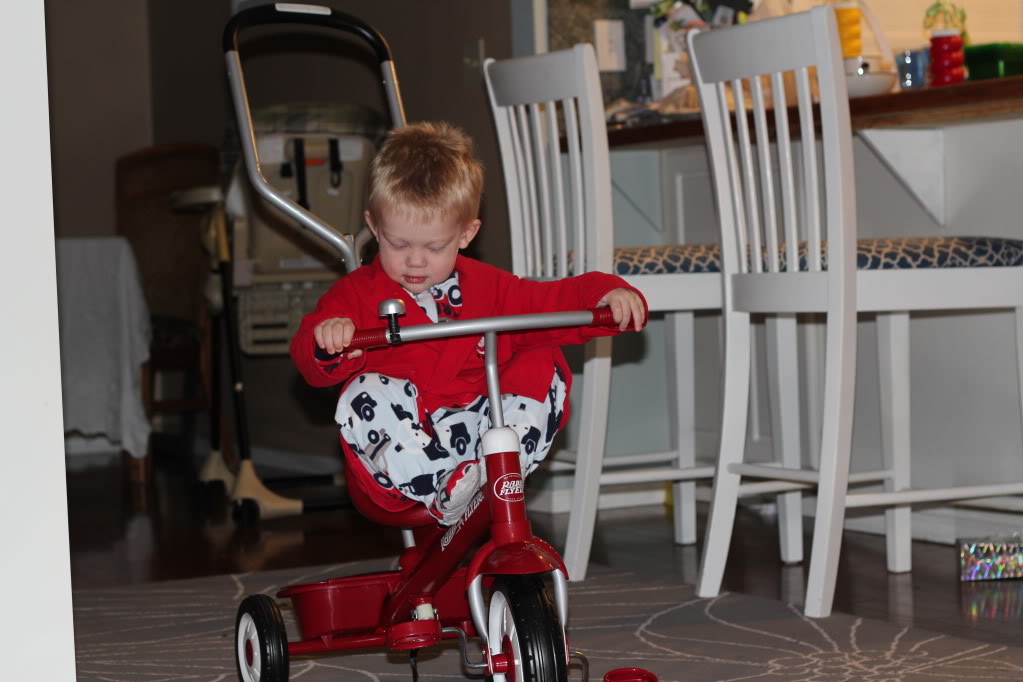 And then there is this toy. I thought he would like it, but I had no idea he would LOVE it as much as he does. 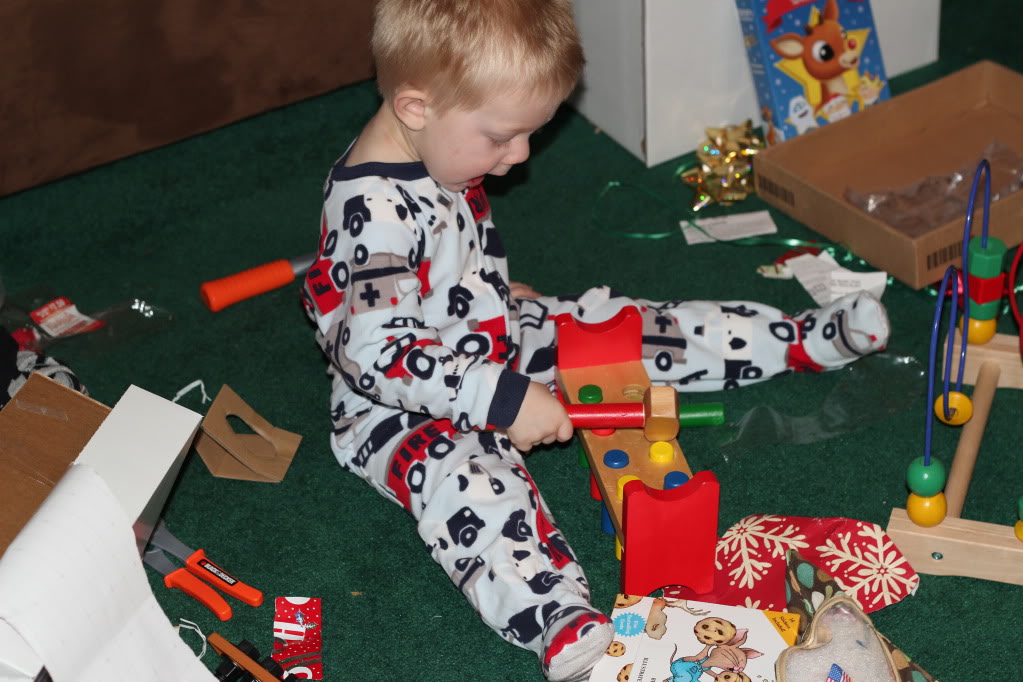 After opening all the gifts I needed to lay down for a little while and take a nap, I guess I wasn't ready to jump back into life yet. While falling asleep I heard Benton hammering this toy. An hour later when I woke up I heard still heard him hammering. He literally didn't stop the entire time. A full hour of hammering. 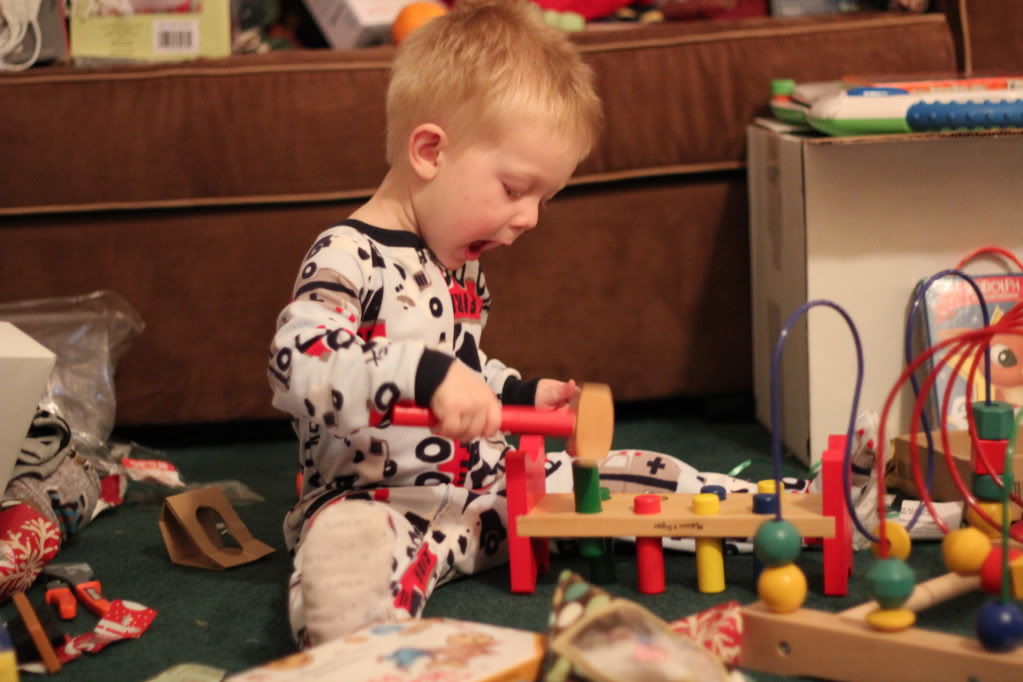 But that wasn't even enough. Throughout the day he would sit down and hammer for 10 minutes, 20 minutes, or just a few minutes. I would bet he spent over 2 hours of Christmas hammering this toy. It has the dents and dings to prove it too. It was the best $10 ever spent. 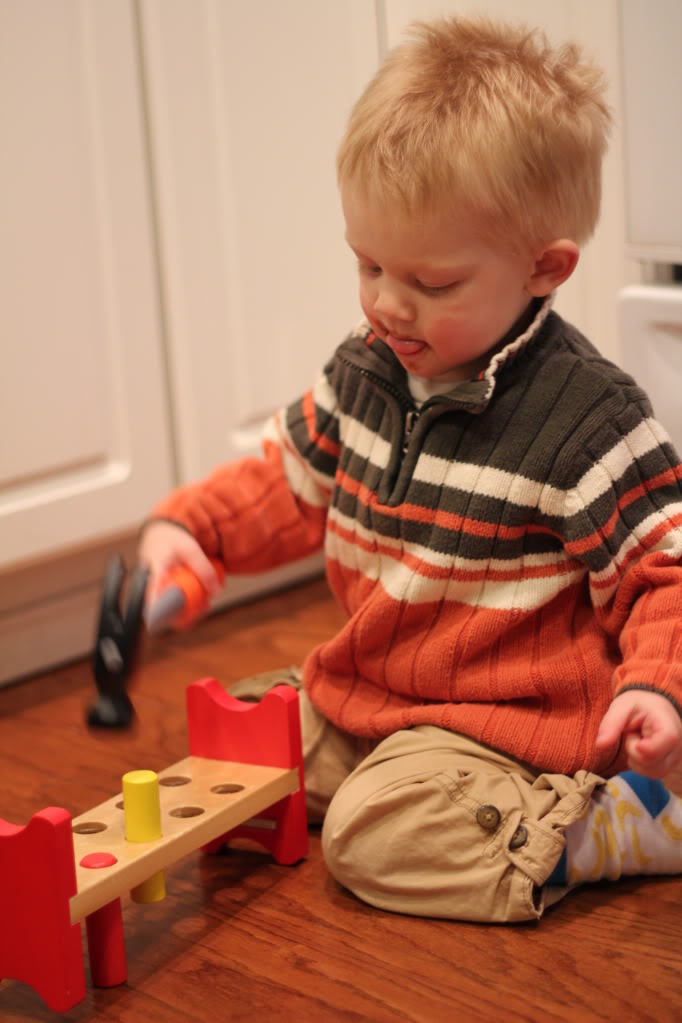 We spent the rest of the day playing with toys, watching a movie and relaxing. It was a wonderful day, and so nice to enjoy time together as a family. We sure love Christmas around here, and not just the presents. It has been so nice enjoying the spirit of the season and remembering what it is all really about. We are grateful for the Savior and for the life he lived for us. It was truly a wonderful day.
Email Post
Labels: Benton Christmas