While on our trip visiting Dallin's family in Utah there was a lot of talk about home projects. My In-Laws are getting new hardwood floors and some new furniture along with the rearranging that goes with all of that. It was so exciting to me! I am so excited to see how it all turns out, but I also wanted to come home and have some of my own projects. We are still in the middle of our bathroom remodel. Which is a huge project I know, but Dallin is doing most of that so I wanted something that I could do. I knew it had to be something somewhat small because we haven't budgeted for anything other than the bathroom. Cue Benton's closet. Wow what a mess. I have wanted to do something with it since we moved it.

Terrible right? When you only have one or two things to put on the shelf you don't care how it looks or if it is organized. But then you add two more, and two more and before you know it it looks like that! To start off I wanted to paint it. You can see that blue swatch painted in the picture. I wanted to paint it a navy blue, but my friend had this darker blue for free! So I went with that. We painted the shelves white, because I love white. Also to off set the dark blue background. Benton was such a helper! He painted the large wall with the brush (well spots of it) while I worked on in between the shelves. He loved it. 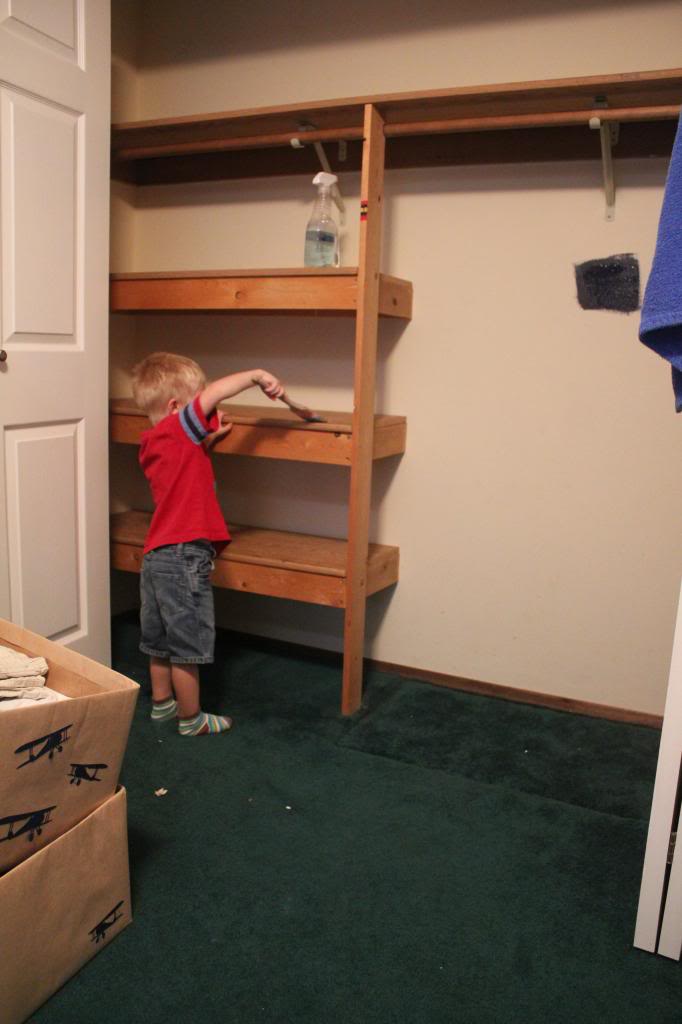 I also picked up some baskets to organize his toys. I was able to get all the toys in the whole house in his room! Between the closet and the bookshelf cubby we are contained! That is, until Christmas. So here is the after shot.

The blue is quite a bit darker than I thought it would be, but I still like it. My favorite thing is the baskets. I feel like when my kids have access to all their toys they don't really play with any of them much. So now that they are all out of reach, we pull down one basket and it is so exciting to them. Plus all the pieces are together can you can actually play with them. Awesome. So there is my first of several little projects. After all I have a nursery to decorate :)
Email Post