Today is Benton's very first birthday. Has it really been that long? Benton has made this past year so amazing and so fun. We love having him in our family.
Right now he LOVES to open and close anything and everything. If he can put a lid on it, he will. If there is a door that is open, he will swing it open to almost shut back to open and on and on until he accidentally closes it. That makes him a little sad. But then he finds chapstick and takes the cap off and puts it back on and... you get the point.
He also LOVES all cables and cords. {can you see where this is going?} We have all our outlets covered with those little plastic protectors, and he stays away from them. But the other day we were sitting in the tv room and Benton was playing on the side of the couch. All of a sudden he started crying, yep you guessed it. He unplugged the computer and shocked himself. The many times that we told him no were of no use, he still did it. I was thinking that this would steer him clear of the outlets but nope, only two hours later I saw him reaching to unplug something else. ahh! Apparently pain wasn't enough to stop this boy. 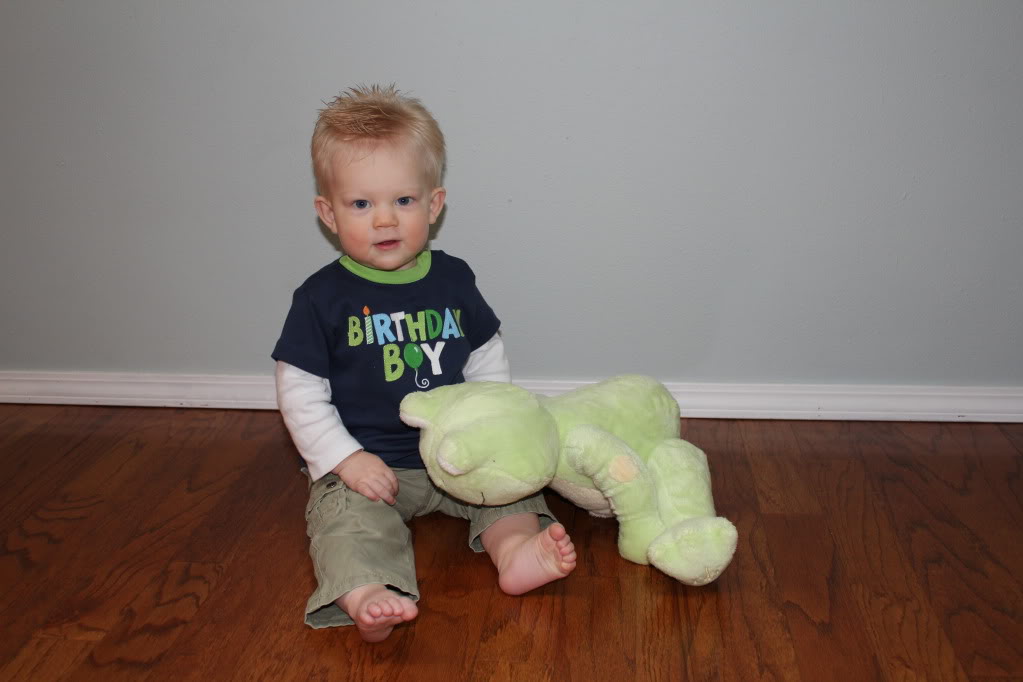 We are so happy that Benton is a good eater. I don't know what I would do if he was picky, I have a hard enough time coming up with things for him to eat as it is! He usually eats whatever we are having though, and sometimes he eats A LOT!
When he hears music he bounces up and down, it was really cute. Maybe I should teach him some more dance moves... 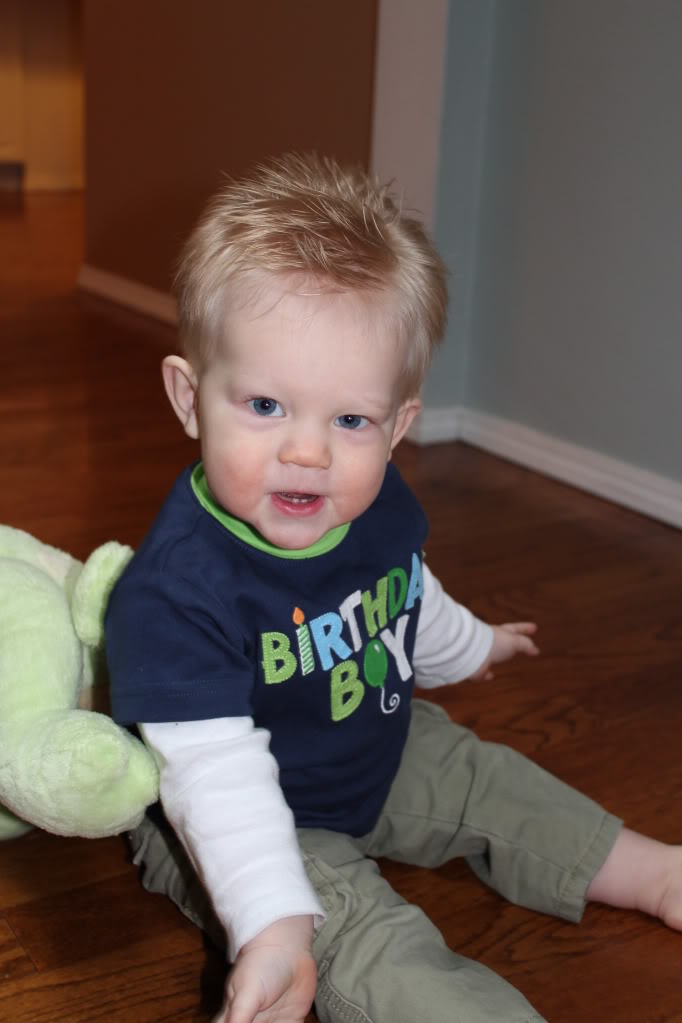 He likes to brush his own hair, which makes his hair do some crazy things!
He is really getting the hang of sleeping at night. About every other night he sleeps the whole night. We put him to bed around 7:30 and he doesn't make a peep until 6:30 or 7. I love those nights. Then the other half of the time he wakes up once around 3 or 5 and goes back to sleep until 7. 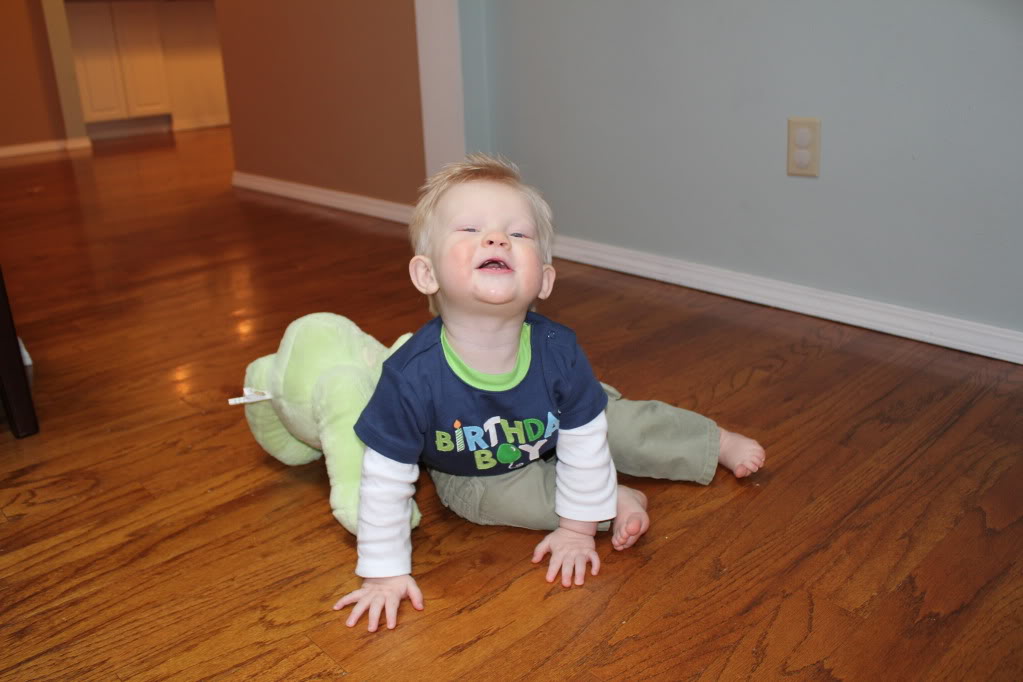 I have always fed Benton to sleep, which I thought would come back to haunt me. So last week I started to put him down for his naps while he is awake so he could learn how to fall asleep by himself (we already started this for night time, but not for naps- and yes it might be a little late but I did what worked). The first day was bad, he wouldn't fall asleep for anything. He only slept 30 minutes that day. I was worried. But the next day he cried himself to sleep after 20 minutes and slept for 2 hours. Now he cries for up to 5 minutes and takes 2 one and a half to two hour naps a day! It is fantastic. I am getting so much done! And he is getting great sleep. 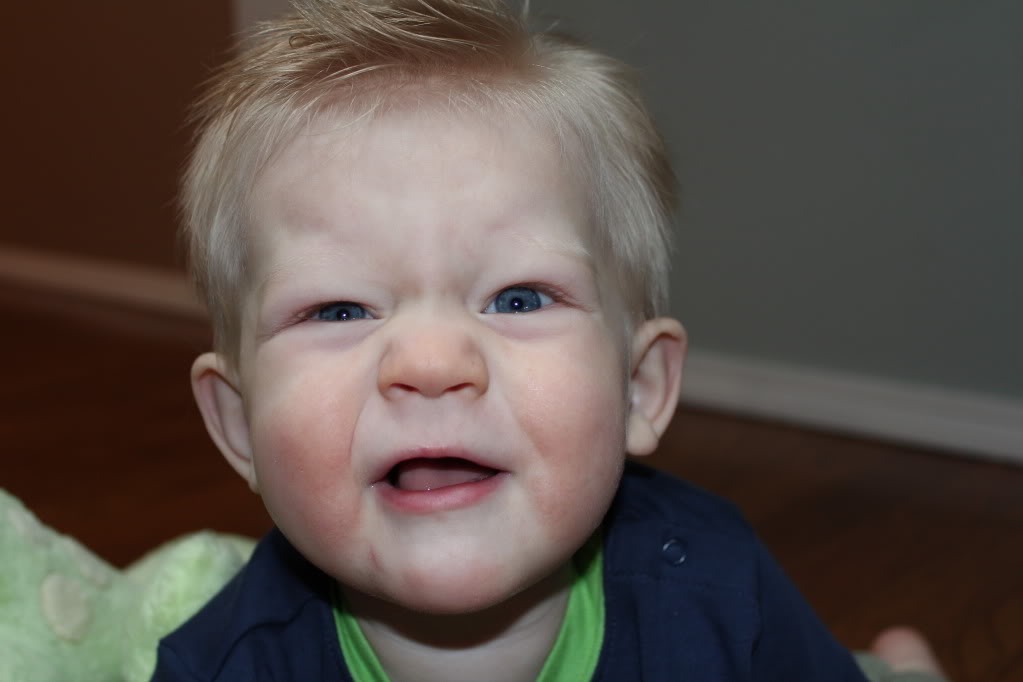 Like I mentioned in the post before, he loves to be free outside. LOVES it. And he loves to just be outside. I am so glad that summer is coming, he will love it. But until then it is nice to have the covered deck, he is satisfied with that some days.
He is into everything boy. He loves balls, monster trucks, cars (he even makes the vroom vroom noise as he rolls them across the floor), and nerf guns. 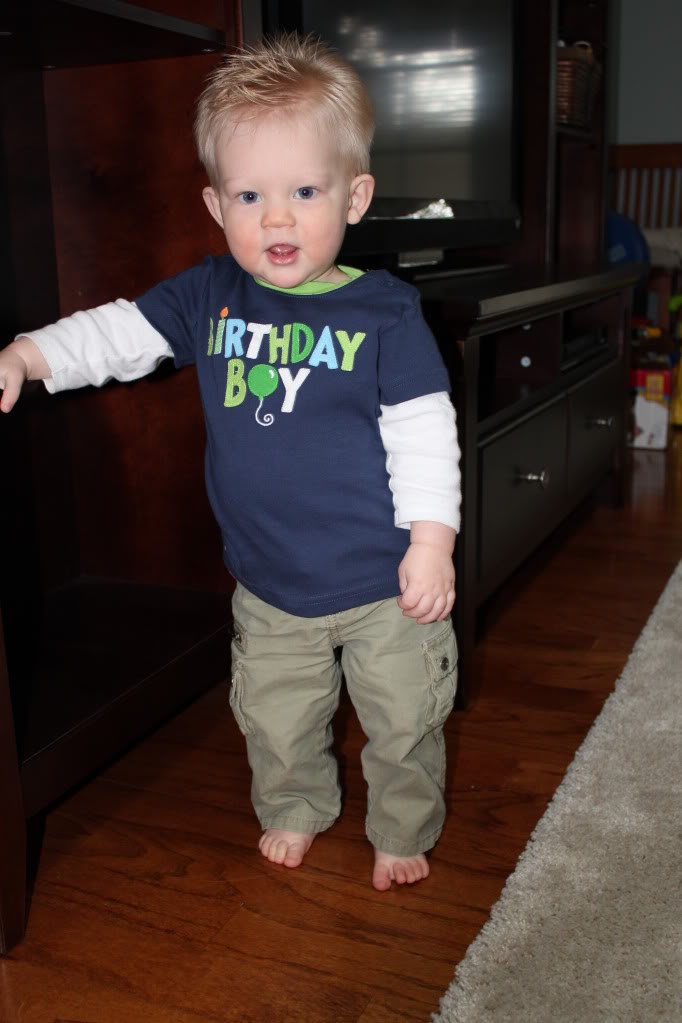 He loves that his car seat can face forward now, there is so much more to see!
He likes to leave me surprises in my shoes
His favorite word is no... so every time he says no I say yes in hopes to counteract it I guess. After a day or two he started saying yes. Yahoo! Except he still says no ALL the time. It is his word for everything.
About a week or so ago he really got the hang of sign language. It is really great. I can ask him if he wants "more drink" and he can tell me! I love knowing what he wants. Now I need to learn more signs so I can teach them to him. He starts repeating signs after the first try now. 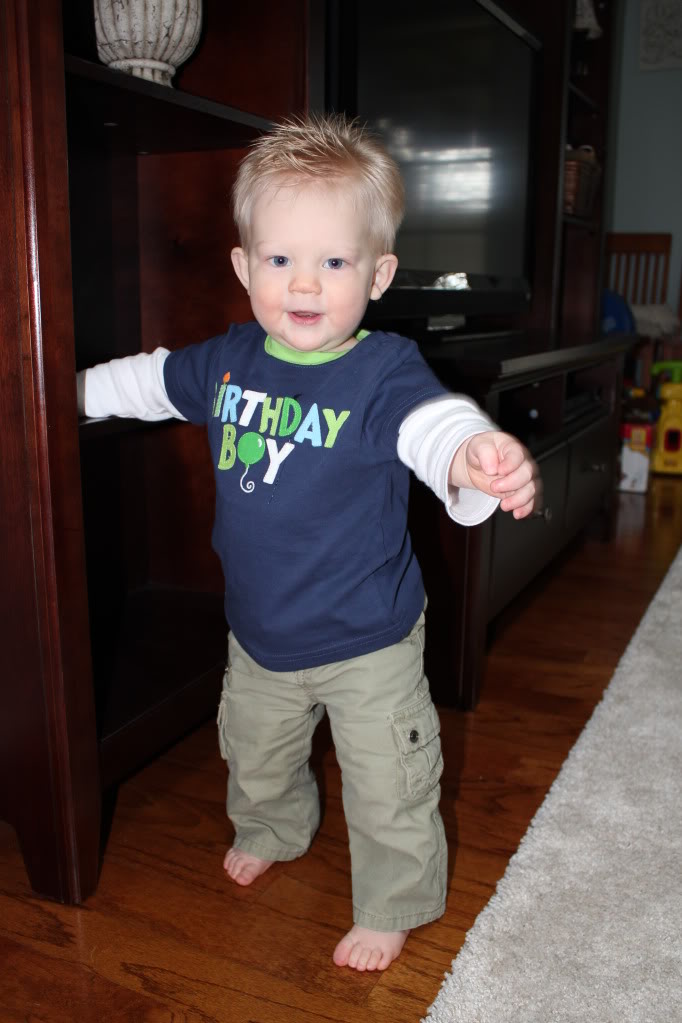 After he wakes up from his second nap he loves to just sit on my lap. We have been going outside and sitting on the deck. He just cuddles with me for 20 minutes. Which is an amazing amount of time for him! I love it, I think it is my favorite part of the day. Plus it is nice to see the flowers in the backyard, normally it is too rainy to even go outside so I wouldn't see them if it weren't for him.
Benton loves making friends, if there is any other kid around he goes to them and smiles. I hope this doesn't change.
He still loves cell phones, and chapstick (just for the lid)
Benton, we have loved you from day one. And loved you more every day we have been a family. Thanks for the best year of our lives. 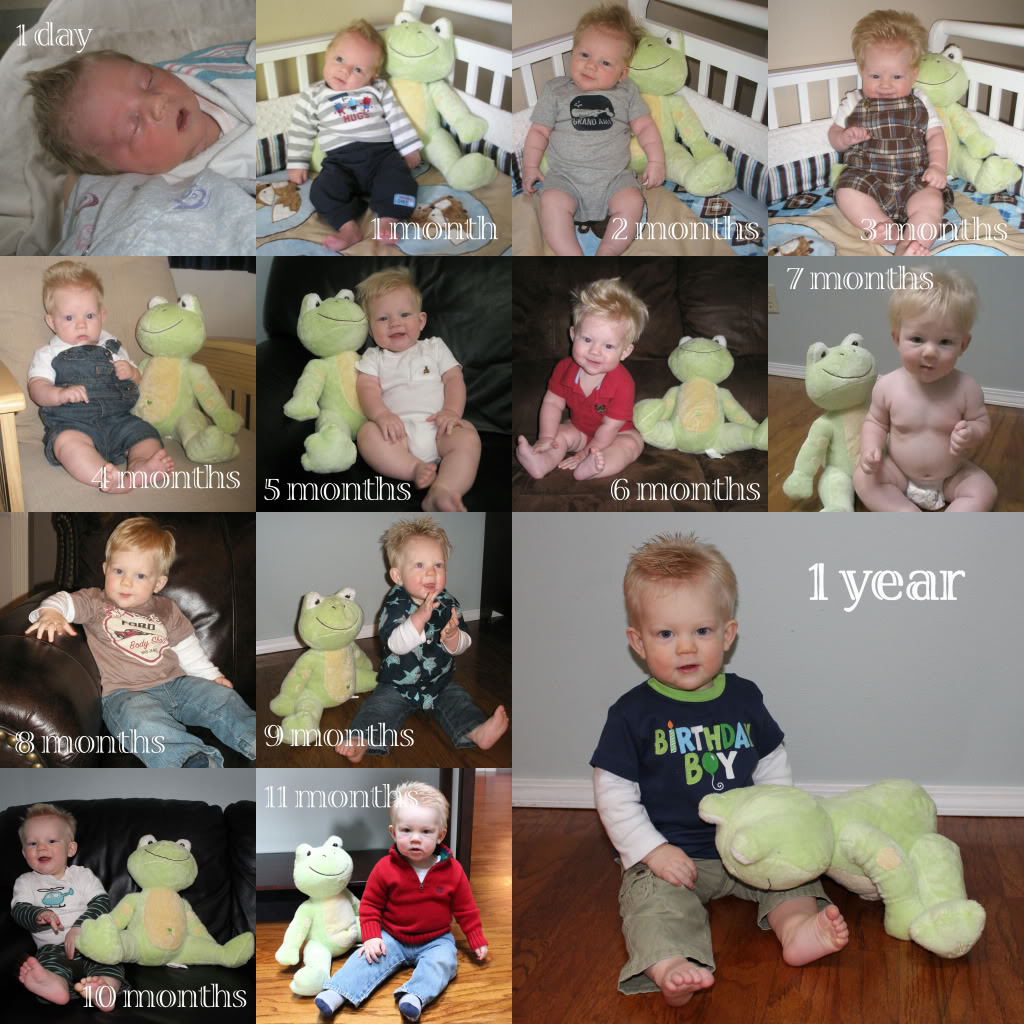